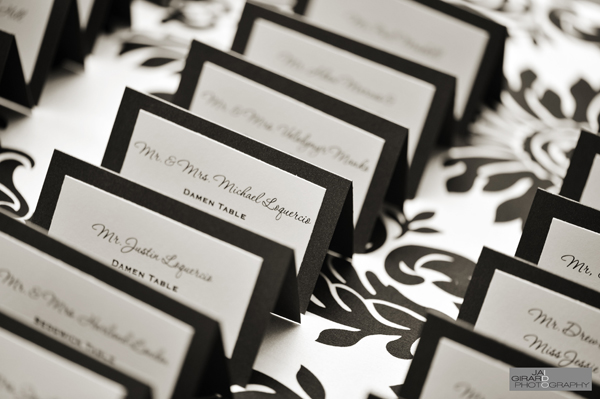 It seems as though every bride and groom has questions on the guest list. There are a few techniques that may help make the process a little easier. The first tip I have is to consider how large of a wedding you want. If you have already chosen your ceremony and reception locations find out the maximum capacity that will give you the absolute highest number you can invite. Another consideration is the budget. Limiting the guest list is one of the best ways to control the cost of your wedding because 45-50% of your wedding budget is spent on food and drink. The smaller the guest list, the less you are paying the reception site and that is usually the biggest expense of the wedding.

There are different methods of dividing up the guest list so there is no major battle between the families. One method involves dividing the guest list into three equal parts, the bride and groom, the bride’s parents, and the groom’s parents. All three groups get to invite the same amount of people and if one group has slots left open then they can be filled with any overflow from the other lists. Another method is to have the bride and groom take half the list and the second half is divided between the bride’s parents and the groom’s parents. Dividing the list keeps the elimination process from getting too personal.

When making out the lists start with the members of the bride and groom’s immediate families and all members of the wedding party. Married, engaged and live-in couples must be invited as a couple even if you do not like or have never met one of them. Couples committed in these ways are sent one invitation inviting both of them to the wedding. Single members can be offered the possibility of bringing a guest but it is not required although much appreciated. If you are inviting the officiant and their spouse remember to add them to your list before you move on to next section of possible invitees.

If you must start trimming the guest list it best to eliminate entire groups. It is easier to explain that co-workers, second cousins, etc. were not invited because there was not enough room than to tell someone that they were singled out by not being invited. Make sure you eliminate everyone in that group because it would be difficult to explain why one cousin was invited but not another.

The A List and B List Method of guest lists needs a lot of preplanning in order to succeed. Guests must not know that they were on the B List or there is potential of feeling second best and having hurt feelings. The  first set of invitations and response card return dates must leave enough time to mail out a second round of invitations with another response card date before the wedding. It can be done but so many couples are not prepared to send their invitations out early that there is not enough time to do a second mailing.

I never advise sending out more invitations than you can accommodate guests. Although statistics tell us that 10-20% will send their regrets, it is not always the case especially when the wedding has been long awaited and most guests do not have to travel to attend. When the budget is very limited and the guest list must be kept short, many couples or parents choose to host another less costly party such as a barbeque after they return from the honeymoon to include the entire list of friends and acquaintances. It is less formal which some guests may prefer and it gives everyone a chance to celebrate the event.

Want to use this article in your E-zine or website? You can as long as you include this complete statement:
Diane Donato is the owner of Starglow Studios Designer Invitations and gives advice on weddings on her blog at www.starglowstudios.dev 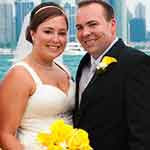 Initially I was not very certain about what I wanted; I knew my color scheme and I saw things that I liked. However, I really did not know how to bring everything together and describe exactly what I envisioned. Diane showed me a variety of samples of her work and offered ideas and from there I was able to narrow it down to a wonderful invitation design! Diane was patient with me the entire time and made sure I was shown multiple options before selecting the final product. Diane brought the “inspiration” and creativity that I did not have! Thank you, Diane! I am forever grateful for your hard work. I am still getting compliments on how beautiful my invitations, programs and menus were.

I just wanted to say a heartfelt thank you to for all your help with our wedding invitations, thank you cards and table cards. I am so glad I found you before I tried to do it all myself. I never could have dreamed of a lovelier invitation to set the tone for an elegant, intimate wedding. You saved me so much time with your suggestions and creative ideas! All our guests were commenting on how beautiful the invitations were! I am sending you a photo of Frank and I on our big day so you can see the smiles you helped put on our faces. Thank you again for going the extra mile to make our wedding absolutely perfect.

My husband and I enjoyed working with Diane. She was very patient and listened to all out needs. We gave her our color theme and told her that we wanted orchids incorporated into our invitations and she did the rest. Diane knew I wanted simple yet pretty and Starglow did that times 10. She made it incredibly easy for us to send them out. Everything turned out beautifully and I couldn’t be happier. From the time the invitations were sent out to the actual wedding, I received so many compliments on them. People were still complimenting them to me on the wedding day.

Starglow was the best in quality

After checking around I felt that Starglow was the best in quality, design and style of the all the invitations I had found. Diane gave me advice which saved me lots of time. The theme she helped create not only added a personal touch for me, but was a huge hit with my guests. They raved about the invitation, the programs and the menus. I would refer Starglow to any bride.

Starglow Studios created my wedding invitations, programs, favors and menus. Diane custom made a special heart design for us. It was beautiful and unique- which is just what I wanted my wedding to be. I received so many compliments on the invitations. People actually wrote comments about them on the response cards and even mentioned them to me in the receiving line! I was so pleased with her work I used Starglow for the birth announcements of all three of my sons. Each time I wanted something different and each time I was more than pleased with how creative and special they were. Since then, I have used Starglow Studios for baptisms and other events. They have all been works of art!